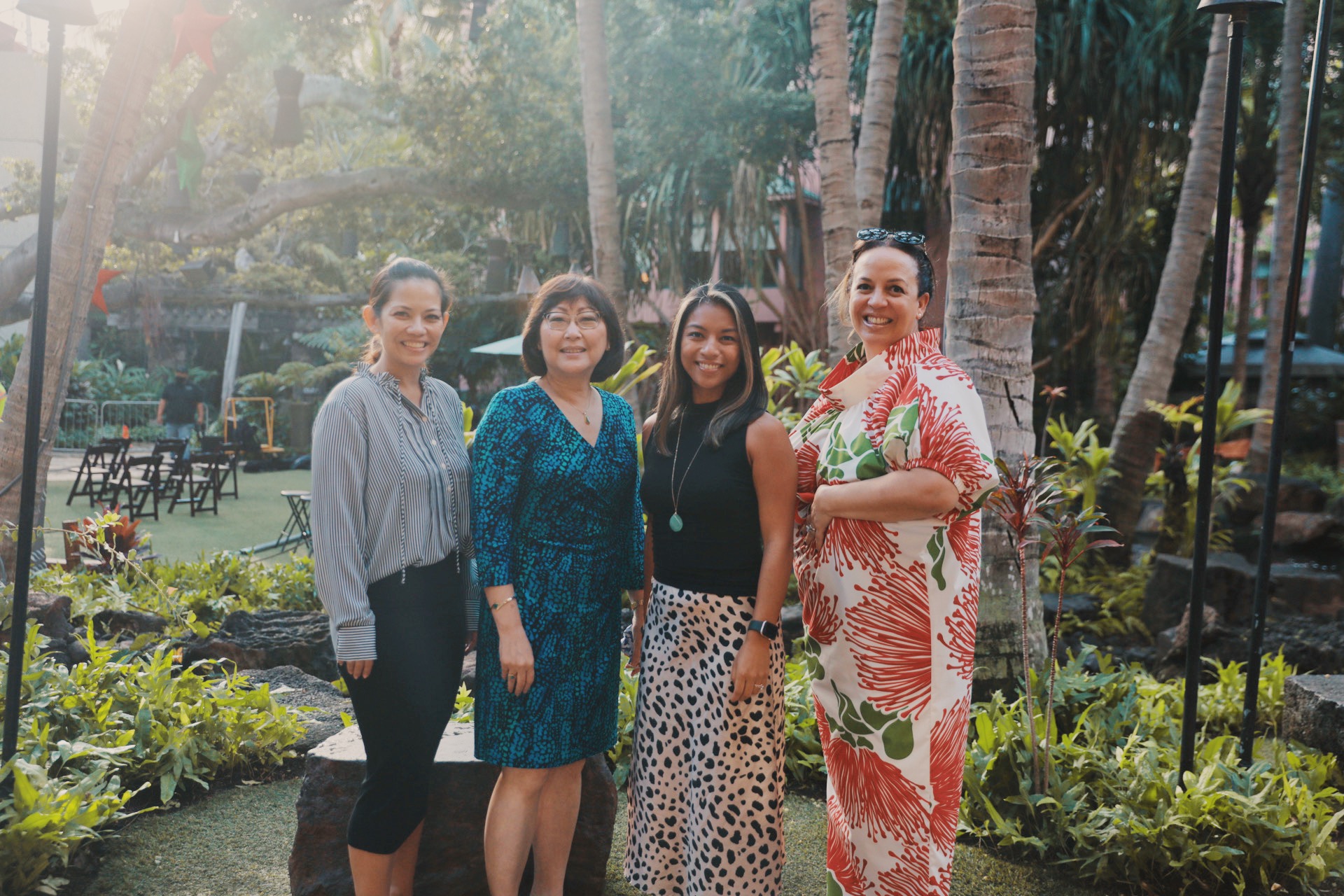 “You’re not lying sister, it’s hot,” earned laughter from the circle of powerful women huddled together at Royal Hawaiian Center. We’d requested the ladies for an early morning media call. Michelle Stofle, Honolulu Magazine’s Strategic Partnerships guru and Aloha United Way’s Women United Board Chair’s exclamation defined well the discomfort that all the women were feeling on an unseasonably hot morning, in Waikiki. Shiny faces and good cheer were brightly visible as the women exchanged pleasantries. I was struck by how much camaraderie and love seemed to ripple through the group as they stared down at a gold pair of tennis shoes worn by Emmaly Calibraro, Vice President of Resource Development at AUW. I soon learned that each had a connection – one that linked them as professionals, community advocates, and volunteers.

Eileen Lacaden Stewart knew she wanted to work with a professional group involved in community work and volunteering, so when she came across Aloha United Way’s Society of Young Leaders, it seemed like a perfect fit. In fact, she decided to take on a leadership role and is currently serving as the Vice-Chair, taking on events, and growing the group. “This weekend we were able to fund a family in need through one of AUW’s partners, Helping Hands – it’s great.” Eileen learned about AUW from her work with Hawaii Appleseed. “For me, the message just resonates, and I want to work with other professionals who feel the same way.” Just as Eileen and I were swapping professional connections, Michelle Stofle winked toward Terri Fujii, another woman in the circle. “Terri is the one who got me involved, oh, and Mea, who isn’t here, but it was those two who strong-armed me into getting involved.” I knew it couldn’t just be a matter of peer pressure, so I wasn’t surprised at all when Michelle revealed that the fellowship and ability to collectively make an impact was also a big factor. “I’ve been involved for about 4 years and the women are fantastic.” The relationships run deep among these women, and it was easy to see the genuine love and admiration as each stood fanning themselves in the heat.

Squeezing herself into a slice of shade was Terri Fujii, AUW Board Chair and Audit Partner at CW Associates. She burst out laughing when I asked her when she first became involved with AUW. “I can’t remember! It’s been a long time.” So, I asked her why she became involved. “Oh, well I think I got invited by some of the old board members. Back then they needed someone who understood numbers. I’m a CPA so they made me Treasurer.” She continued to explain that the reason she remained involved had a lot more to do with AUW’s reach. “I love knowing more about what’s happening in the community, where the needs are and what’s really needed. AUW works with so many nonprofits and causes, it’s the place to be to understand the full picture of need in the community. So, I stayed.” It’s up for debate just how many years now she’s been involved, but she’s been in the Board Chair position for 5 years. When asked whether she strong-armed Michelle Stofle into joining, she whipped her head around in denial. “It wasn’t strong-arming, it was lunch!” Again, laughter floated among the women.

Shaun Benton, another Women United member and Senior Counsel at Cox Wooten Lerner Griffin & Hansen, LLP, chimed in that she too had been wooed by Terri and Michelle. Her best friend also played a role. “Unyong Nakata is my best friend so between Terri, Michelle, and Unyong I was convinced.” Shaun admitted that the relationships were key to joining the group, but she was really enamored by the opportunity to focus on specific programs. “Women United focuses on women and children, so the programs and opportunity to volunteer around this group means a lot to me.” She seemed especially animated about the Chocolate, Champagne, and Couture for a Cause. “The event is back again on April 30th and we’re really excited for it.” At just that moment, Michelle added, “I love it – I love that it’s back.” The pandemic forced the group to cancel, but they all seem to be anticipating bringing something great back again.

There’s no question that connections matter. Relationships matter. A lunch date, whether strong-armed or not, can change the course of our lives and in turn, change the course of someone else’s life. An invitation to add CPA skills to a board was accepted. Look what that, “yes” made possible. Maybe this is a story about relationships and the desire to impact our community. Maybe it’s just a story about participation. I think maybe, it’s a story about how much we really do need one another to bring about change. The next time you receive an invitation to lunch, accept it. See what happens.