Questions about COVID-19? Click here for more information.
The Kupuna Call Center can assist adults 65+ with COVID vaccine appointments. Call 2-1-1 or learn more here.
Does the eviction moratorium apply to you? Information and resources here. 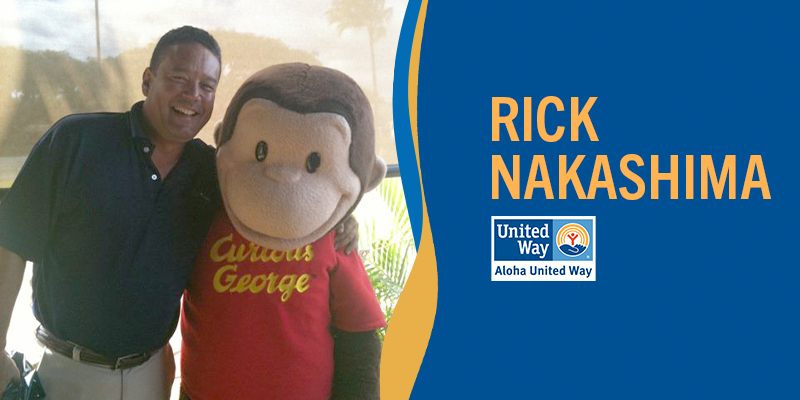 Nov. 12, 2021
By: Carolyn Hyman
Rick Nakashima is the CEO-Partner of four Ruby Tuesday Hawai’i locations, four Gyu-Kaku Japanese BBQ locations, and the Kalihi Rainbow Drive-in. Rick is an extremely busy man, but he makes time for his community. In fact, if he were to explain what community support looks like, he would describe it as a central part of his business. It's not something that he does on the side, itʻs core to who he is and what his businesses do in Hawai’i.
A graduate of Kaiser High School and the University of Hawai’i at Manoa, Rick grew up in Hawai’i Kai. His branches continue to grow in the community. Heʻs married to Renee Archer Nakashima, with whom he has two children, Rico and Tia. An active business leader locally, heʻs often called his corporation, “the most charitable in the state”. He even jokes that heʻs a part time zoo keeper with his two dogs, Jenday conure, turtle dove, rescue duck, and Siamese fighting fish at home. Some might say that he has a problem saying, “no”, but heʻs just committed to saying, “yes”.
Heʻs partnered with Marcus Mariotaʻs Motiv8 and Titoʻs Vodka, as well as the Hawaii Humane Society SPCA. Through his businesses, he has been able to provide tens of thousands of meals to those in need. Most recently, he has partnered with Aloha United Way for an end-of-year Workplace Giving Campaign. Heʻll utilize the strength of his businesses to raise money for AUW programs and initiatives. He understands that AUW has the ability to identify the most critical areas of need and work toward solutions quickly.
Anyone visiting one of his four Ruby Tuesday Hawai’i locations can round up their bill and the difference will be donated, starting December 1, 2021. “We are so very proud to partner up with AUW! Our team members do their best to contribute to multiple causes, we have a culture of giving and this fits right in,” shared Nakashima. Employees contribute during the campaign, but so can customers.
You can visit any of Rick Nakashimaʻs Ruby Tuesday locations in Hawai’i and your, “pennies will turn into dollars.” Those dollars will be spent to help those in need. “Your tummy and your heart will feel good,” the CEO exclaimed. Specifically, the donations will help Aloha United Way maintain critical services like the 211 statewide helpline, Safety Net, and AUW ALICE initiatives.
*Ruby Tuesday Hawai’i locations are: Kapolei, Mililani, Moanalua Center, and Windward Mall. If you are interested in hosting a Workplace Campaign, please register and find more information here.
