Questions about COVID-19? Click here for more information.
The Kupuna Call Center can assist adults 65+ with COVID vaccine appointments. Call 2-1-1 or learn more here.
Hawai‘i’s eviction moratorium will expire in August. If you will be affected, here’s how to prepare.

Will pricey Hawaii do enough to limit evictions? 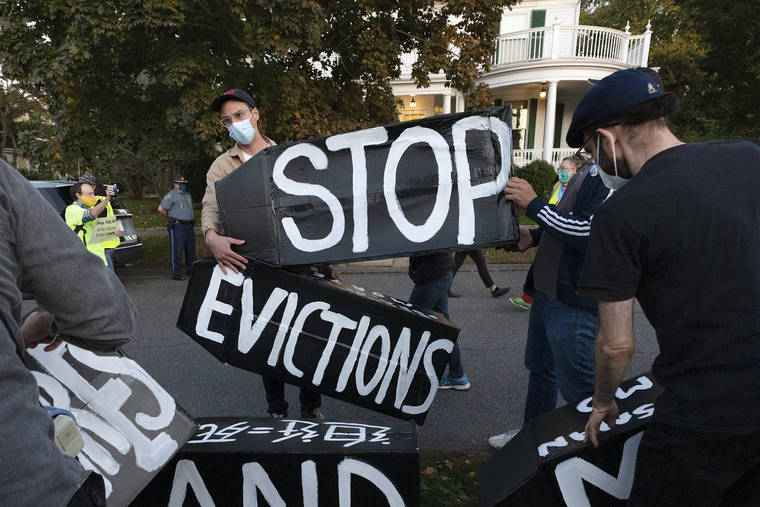 HONOLULU — A federal freeze on most evictions enacted last year is scheduled to expire July 31, after the Biden administration extended the date by a month. The moratorium, put in place by the Centers for Disease Control and Prevention in September, was the only tool keeping millions of tenants in their homes. Many of them lost jobs during the coronavirus pandemic and had fallen months behind on their rent.

Landlords successfully challenged the order in court, arguing they also had bills to pay. They pointed out that tenants could access more than $45 billion in federal money set aside to help pay rents and related expenses.

Advocates for tenants say the distribution of the money has been slow and that more time is needed to distribute it and repay landlords. Without an extension, they feared a spike in evictions and lawsuits seeking to boot out tenants behind on their rents.

Advocates for tenants say the distribution of the money has been slow and that more time is needed to distribute it and repay landlords. Without an extension, they feared a spike in evictions and lawsuits seeking to boot out tenants behind on their rents.

As of June 7, roughly 3.2 million people in the U.S. said they face eviction in the next two months, according to the U.S. Census Bureau’s Household Pulse Survey. The survey measures the social and economic effects of the coronavirus pandemic every two weeks through online responses from a representative sample of U.S. households.

Here’s the situation in Hawaii:

What’s the status of eviction moratoriums in the state?

Hawaii has its own moratorium imposed by an emergency declaration from Gov. David Ige. It’s due to last through Aug. 6, giving local renters an extra week to get ready.

Ige said he hopes measures to encourage landlord-tenant mediation, efforts to get people back to work and rent-relief programs will help the situation.

Hawaii’s counties are providing federal relief money to those needing help covering their rent and utility bills. On Oahu, Catholic Charities Hawaii and the Council for Native Hawaiian Advancement are processing $114 million for those behind on rent and utility bills going back to March 13, 2020. It will be in effect through December 2021.

On Monday, Ige signed legislation encouraging landlords and tenants to mediate disputes as a means to prevent evictions. The new law also aims to stop an avalanche of cases overwhelming the courts when the moratorium expires.

It requires landlords to notify a mediation center if they are terminating a rental agreement to prevent landlords from going directly to court. It also delays when a landlord may take possession of a unit if a tenant schedules mediation, potentially giving tenants time to work things out. The measure allocates funds to mediators who may negotiate rent reductions and payment plans and help landlords and tenants obtain rental assistance money.

Aloha United Way has been training staff who answer its 211 helpline on the rights and responsibilities of landlords and tenants. They are ready to refer people to mediators and places where they can apply for rental assistance.

Lisa Kimura, who oversees Aloha United Way’s COVID-19 response programs, said mediation programs have successfully kept people housed in the past. She hopes that will be the case under the new law.

How are the courts handling eviction hearings?

The existing moratorium currently prohibits evictions because a tenant has fallen behind on their rent.

Ray Kong, director of litigation at Lawyers for Equal Justice, said he has heard of landlords attempting to get around the moratorium by filing broad cases to evict people for damaging property or otherwise violating lease terms. If tenants don’t show up in court to answer these cases, a default judgement may be issued against them. Kong said it’s vital that tenants show up in court so a judge can determine whether a case should go to mediation.

How affordable is housing in major rental markets?

As of June 1, the median monthly rent for Oahu units advertised on Craiglist was $1,800, slightly below $1,825 in March 2020, according to data compiled by Justin Tyndall, assistant professor of economics at the University of Hawaii’s Economic Research Organization. Rents dipped as far as $1,600 in December during the pandemic but bounced back.

Ricky Cassiday, an independent real estate market analyst, said rental prices on other islands like Maui have gone up more given tourism has rebounded faster there than on Oahu. That’s because the robust pace of COVID-19 vaccinations in the U.S. has fueled a surge in tourists from the mainland, who dominate travel to those islands. Oahu, meanwhile, is normally also heavily visited by travelers from Japan, South Korea and Australia, where vaccinations have lagged.

Are evictions expected to create a surge in homelessness?

Nicky Winter, the executive director of Achieve Zero, which is contracted by the state to provide services to homeless from Aiea to Kapolei and Mililani to Oahu’s North Shore, said she is concerned the expiration will lead to a spike in homelessness.

“I don’t know that anybody can fully prepare for the onslaught of those that will be in trouble come August when the moratorium ends,” she said.

During the pandemic, her agency received 15 to 20 calls a day from people seeking help paying rent compared with four to five calls a week before COVID-19. One caller was behind $24,000, or 10 months worth.

Even if Achieve Zero is able to help an evicted family find new housing, she noted the tenants will still be responsible for back rent they owe and will have to figure out how to pay it off.

Nonprofits like hers are doubly challenged by limited funding and difficulties they are encountering hiring staff while demand for their services grows.

“I would really wish that everybody retain their sense of aloha and know that we have to work together. But we’ll get through it,” Winter said.